Disclaimer: Featured backround image is not mine.

Before we begin, have you heard of Storybird? It’s an awesome site filled with awesome writers. I write there, so if you want to check out more of my stories, click on this link.

Without further ado, here is my story. The genre is romance, and it is set in WWII. 🙂

He brushed a tear from my cheek. “Don’t you worry, Lily,” he whispered. “Wait for me. It will be sooner than you think. I’m gonna come home to you. Just you wait.”

I nodded vigorously, the rest of my body as stiff as a pole. A gust of wind blew my dress lightly.

Jack gave a half smile. Reaching down, he dug his hand in his pocket, pulling something out.

My hand flew to my mouth, and I could feel the tears sticky against my cheeks. It was a ring. A silver band with a tiny jewel on the top. I bit my lip softly, feeling the heat rise to my cheeks. The jewel wasn’t a diamond, but it was beautiful.

Jack fingered it nervously. I could almost feel his knees knocking against mine. “This,” he said, “Is a promise ring. M-may I?”

I nodded. Scrambled words in my head didn’t come out.

He lifted my left hand and slid it onto my ring finger. He straightened, searching for the right words. “No matter how far war takes me, or how long I have to be away, I’m comin’ home. And I’m gonna marry you, Lillian Elizabeth Markas.”

A tear made its way down his cheek and it was my turn to wipe it away. My chest heaved as I drew in a breath. Clasping my hand, I felt the cool of it around my finger. I would cherish it forever.

“Thank you.” I whispered.

“I’ll write to you every time I get pen and paper.” He already wore his uniform, and the greenish brownish hat sat atop his mop of brown hair. “And I’ll pray for you everyday.”

“I love you too, Lily.” He pulled away and boarded the train, just as it chugged down the track. I watched him wave goodbye through the little train window. I lifted my arm and waved back, the ring glinting in the sun as the clouds gave way.

“See you later!” he called. See you later. I bit my lip, gazing again at the ring. A promise ring. He would came back to me. I just knew it.

I’m coming home. It’s strange to say those words. I have been waiting to say them for a long time. Lily…

I thought I saw a teardrop stain on the paper.

I’m not the same man I was when I left. I’ve seen things my mind can’t erase. I’ve lost countless men, fighting by my side. But I’m coming home, Lily. I cannot write much, but I will see you soon. I love you with all of my heart.

May God bless you, and keep you. May his face shine upon you and give you peace.

I leaped off the bench, clutching the letter close to my heart. Three years. Three years and my Jack was finally coming home.
But he wrote nothing about the war ending. And no news spoke of it. My heart ached. He would have to leave again. But at least I would see his face again, and feel his hands in mine. Two days later, I rushed to the train station where I last saw him.

I waited. And waited. Finally, the train pulled into the station. I leaped off my seat, the wind blowing my hair. Men, women, and children filed out. But no Jack.

I pushed through the crowd, waiting to see his face. “Jack?” I called. “Jack!”
There he was. He stepped out of the train, his face glowing; a huge smile on his lips. He looked different. Wounds and scars encased his face. But his eyes. They were still the same. They were sad, but they were the same playful, caring, twinkling blue eyes I remembered.

“Lily-“ he breathed. I rushed towards him, throwing my arms around him. “Jack!” I nearly screamed the name.

Everything around us seemed to disappear; the reunions of loved ones, the fathers returning from the war. It was just us. “Oh, I missed you!” he kissed my forehead. “I missed you so much.”

He wrapped his arm around me, and I immediately pulled back. Something was wrong. His left sleeve hung limp at his side. I stared at the empty sleeve, trying to form even a breath.

He opened his mouth to say something, but I stopped him.

“Jack-” I searched his eyes. “Y- you’re alive. W…w-when I got that telegram…I thought-”

His eyes twinkled as he gave one of his famous half grins. “I told you I would come home. I never break my promises.”

The next few days were the happiest days of my life. Jack was home. But he was going to leave again and I couldn’t bring myself to ask him when.

One night, he brought me up our favorite hill. Clouds dotted the sky, but it was a beautiful night. The moon was full. The stars shone bright. Rose petals lined their way up the hill, surrounding a checkered picnic blanket at the very top. A single candle burned cherry blossom and apple, my favorite scents. 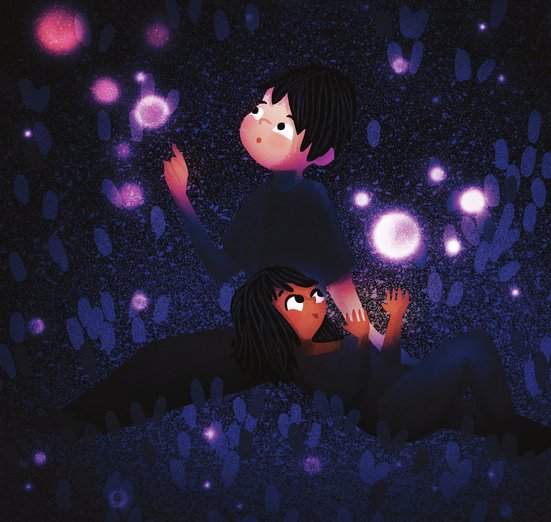 He took me by my hand, and breathing heavily, dropped to one knee.

I slowly shook my head. No. Not now…please. Not when you’re leaving again.

“I love you, Lillian,” he said, pulling from his suit pocket a tiny box. He opened it, gazing into my tear-filled eyes with his sky-blue ones. A diamond ring lay inside, sparkling in the night. Three diamonds stood proud atop the silver loop.

“Three years ago, I made a promise to you. But-“ He choked on his words. “I’m not the same man as I was when I left.” He stared at the stump of his arm.

“And I made a promise to wait for you.” I said, stroking his cheek. The tears threatened to spill. “No matter what.”
No matter what. Even if he would just leave again? I straightened. Then I would wait for him until he could be with me forever.

He looked down then up at me again, blushing furiously. “Will you marry me?”

I broke down, my body shaking with uncontrollable crying. I shook my head. “No. No. No.”

“No?” disappointment flooded his eyes and he stood up, his hand slipping from mine. “Why?”

“Oh! I mean yes.” I said quickly, a flicker of a smile on my lips. It disappeared as soon as it came. “But…you’ll have to leave again, Jack.” My words came out hard, the tears falling with every syllable, and I gasped for breath. “We won’t be together.”

I buried my head in his shoulder, unaware of what he was saying. “Lily.” He repeated, tilting my chin gently to look at him. “The war is over.”

He laughed, grasping my hand in his. “It’s over. I’m sorry for not telling you before. I wanted to surprise you.”

I flung my arms around him. This time I knew he would never leave me. “Jack!” I pulled back. “It’s over?” I laughed.

“It’s over!” he lifted his head and yelled into the breeze.

I felt a drop of rain on my forehead and looked up. The rain drizzled down on us, our hair sparkling with the dew drops. The candle puffed out and it was just us on the hill.

“It’s raining!” he laughed. Sticking his tongue out like a little child, he caught a drop on his tongue. Yes, he was different. Physically and emotionally. I knew that. War does that to you. But this was the same man I fell in love with. The man who would be the father of our children. The man I wanted to grow old with.

Pulling me close, he slipped the ring on my finger, on top of the promise ring. “I’m home.”

And there you have it folks! *wipes tear* A mushy romantic love war story. 😉

I hope you enjoyed, and God bless!

What did you think? I'd love to hear your thoughts. Please keep them clean and respectful, and do not take God's name in vain. Thanks! Cancel reply

This is a text widget, which allows you to add text or HTML to your sidebar. You can use them to display text, links, images, HTML, or a combination of these. Edit them in the Widget section of the Customizer.
Back to top
%d bloggers like this: